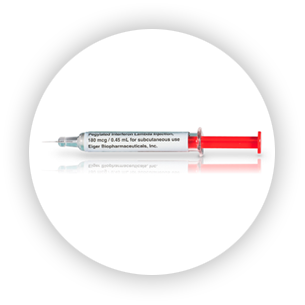 HDV is the most severe form of viral hepatitis

Hepatitis Delta is caused by infection with the Hepatitis Delta Virus and leads to the most severe form of viral hepatitis. HDV occurs only as a co-infection in individuals infected with Hepatitis B Virus (HBV). HDV leads to more severe liver disease than HBV alone and is associated with accelerated liver fibrosis, liver cancer, and liver failure. Approved nucleos(t)ide treatments for HBV only suppress HBV DNA, do not affect HBsAg, and have no impact on HDV.

Eiger is developing peginterferon lambda (Lambda) as a well tolerated interferon for the treatment of Hepatitis Delta Virus infection.

Lambda is a well-characterized, late-stage, first in class, type Ill interferon (IFN) that stimulates immune responses critical for the development of host protection during viral infections. Lambda targets type III IFN receptors which are distinct from the type I IFN receptors targeted by IFN alfa. These type III receptors are highly expressed on hepatocytes with limited expression on hematopoietic and central nervous system cells, which may reduce off-target effects and improve tolerability of lambda. Although Lambda does not use the IFN alfa receptor, signaling through either the IFN lambda or IFN alfa receptor complexes results in the activation of the same Jak-STAT signal transduction cascade. Hepatitis Delta is a disease with a significant impact on global health, which may affect up to 20 million people worldwide

The prevalence of HDV varies among different parts of the world. Globally, HDV infection is reported to be present in approximately 4% to 6% of chronic Hepatitis B carriers. The prevalence of HDV in patients infected with chronic HBV is even higher in certain regions, including certain parts of Mongolia, China, Russia, Central Asia, Pakistan, Turkey, Africa, Middle East, and South America, with an HDV prevalence as high as 60% being reported in HBV-infected patients in Mongolia and Pakistan. Globally, HDV infection is reported to be present in approximately 4% to 6% of chronic hepatitis B carriers. 70% of HDV-infected patients will progress to cirrhosis within 5 to 10 years and >50% of patients are cirrhotic at diagnosis.

The Hepatitis Delta Virus expresses only one protein, the Hepatitis Delta antigen (HDAg), which comprises a nucleocapsid-like structure with the genome. There are two forms of HDAg, small and large. Together, these and the single-stranded RNA genome are surrounded by a lipid envelope, which is embedded with HBV-derived surface antigen (HBsAg) proteins. Indeed, HDV does not encode its own envelope proteins and must “steal” them from HBV. Hence natural HDV infections always occur in the presence of a co‑existing HBV infection. HBsAg is the only element of HBV relied upon by HDV; HDV replication can occur independent of HBV replication.


HDV: MOST RAPID PROGRESSION OF DISEASE

50% of HDV-Infected Patients are Cirrhotic at Diagnosis

LIMT HDV was a 1:1 randomized, open-label study of Lambda 120 or 180 μg subcutaneous injections administered weekly for 48 weeks in 33 patients with chronic HDV. End of treatment was followed by a treatment-free 24-week observation period. The primary objective of the Phase 2 study was to evaluate the safety, tolerability, and efficacy of treatment with 2 dose levels of Lambda monotherapy in patients with chronic HDV infection. All patients were administered an anti-hepatitis B virus nucleos(t)ide analog throughout the study. LIMT HDV was an international study with 4 sites in New Zealand, Israel, and Pakistan. The Phase 2 LIMT HDV study has completed. For more information, go to clinicaltrials.gov.

Primary Endpoint: Secondary Endpoint: In Phase 2, Peginterferon Lambda was dosed once weekly in HDV infected patients for 48 weeks with 24-week follow-up. 36% of patients who received Peginterferon Lambda achieved a Durable Virologic Response (DVR), defined as HDV RNA below limit of quantitation or undetectable at 24 weeks post-treatment. This post-treatment DVR endpoint is most meaningful for both regulatory agencies and physicians as it demonstrates durability of response to treatment and potential for an HDV cure.

LIFT is an open-label, Phase 2 study evaluating Lambda + Lonafarnib + Ritonavir in 26 HDV-infected patients. Patients will be dosed for 24 weeks + undergo follow up for 24 weeks. Primary endpoint will be > 2 log10 decline in HDV RNA at end of treatment. Secondary endpoints will include histology (> 2 point improvement in histological activity index and no progression in fibrosis) at end of follow up. LIFT is being conducted within the National Institutes of Health (NIH) at the National Institute of Diabetes and Digestive and Kidney Diseases (NIDDK). For more information, see clinicaltrials.gov 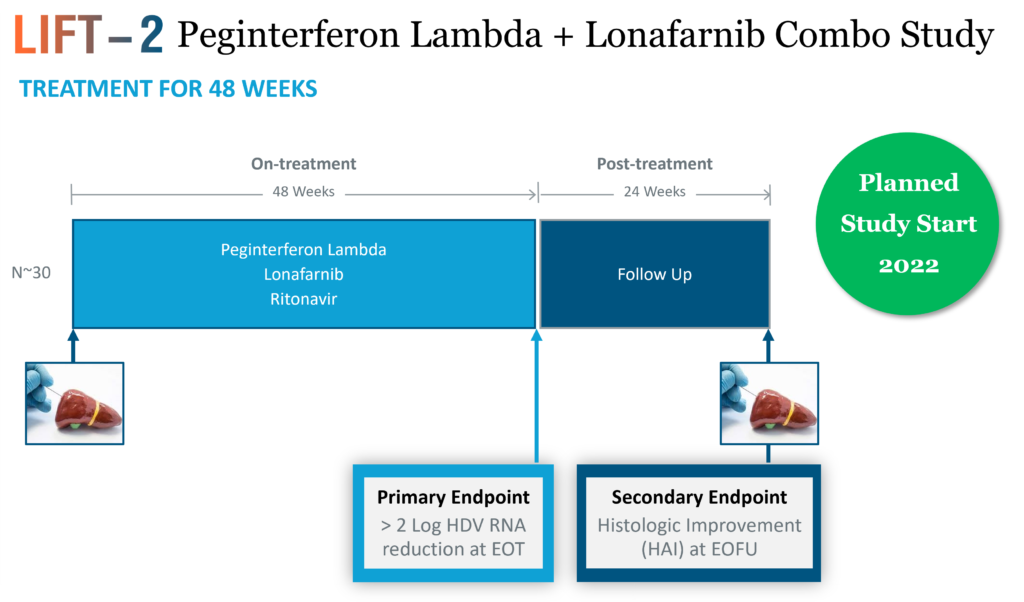